Finally- A Grown Up is in Charge of the Bucs - 99.3 ESPN
Campaign of Kindness: Our Hometown Heroes: 99. 3 ESPN wants to celebrate people in our local communities whose acts of kindness serve as an inspiration to us all during these times.… 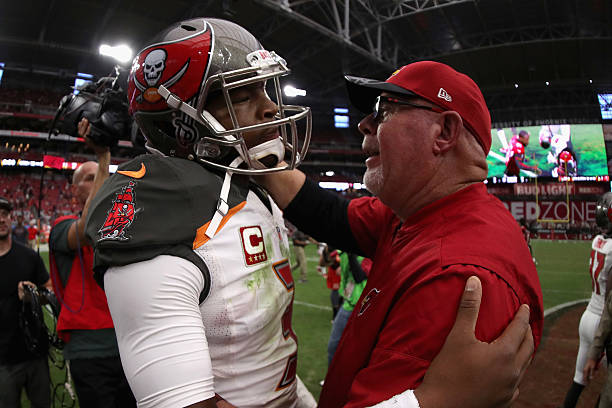 Tuesday January 8th, 2019. We all thought the Tampa Bay Buccaneers hiring Bruce Arians as their next head coach would result in more success on the field- hell, it had to. Arians had success with Andrew Luck, Ben Roethlisberger, Carson Palmer, and even has a book titled “The Quarterback Whisperer: How to build and Elite NFL Quarterback.” This hiring is a great thing for Jameis Winston. But something happened yesterday that showed me Arians will not only build a better product on the field, but will turn the entire franchise into a legitimate one.

Appearing on the Adam Schefter Podcast, BA was asked about out of favor Steelers wide receiver Antonio Brown, and if the Bucs would pursue him this offseason. His response was one of a grown up: “There’s too much miscommunication, too much … diva,” This response shows me a few things: 1) Arians is confident that he can take the roster as currently constructed and win. 2) He doesn’t feel the need to “win the off season”- We’ve seen in the past teams that try to build through Free Agency fall on the face more often than not (i.e. Miami and Washington.) and 3. Arians will bring legitimacy to the Bucs for the first time since Jon Gruden was in charge.

There are a few premier franchises in the NFL- The Pats, Giants, Ravens and Steelers come to mind- How many times have one of these teams moved on from a player and the player has gone on to have success? Not often is the answer. If the Steelers are moving on from a top tier talent like AB, the rest of the league should take notice. But, inevitably there will be one sucker out there who gives up way too much for a receiver on the wrong side of 30. The good news here is that sucker will not be Tampa Bay.

Now, I don’t know if Raheem Morris, Greg Schiano, Lovie Smith or Dirk Koetter would have put a deal together to bring AB to TB, but I highly doubt they would use the word “diva” to describe one of the most talented wide receivers in the league. If Arians will talk about one of his former players (Bruce was the OC in Pittsburgh for the first 2 seasons of Browns career) this way, do you think he’ll be afraid to call out an underperforming player on his team (cough, Jameis Winston)? I don’t think so.

Under the previous 4 coaches, the Bucs were a combined 55-105; Arians will improve on those numbers, and that should excite Bucs fans. What should be sending Bucs fans over the moon right now is that there is finally someone in charge of the team who will fix the culture in the Bay area- no more trying to find a leader of men- they have theirs, and his name is Bruce Arians.